On my Dutch blog, I started posting "day in the life" blogs last week. Don't know why, but I felt a pull towards documenting the normal parts of my days as well as the things that are so different right now.
I decided that I might as well copy those posts and translate them for this blog. I'm not really sure if that's what I want here in the long run, but let's see how it goes for a while. 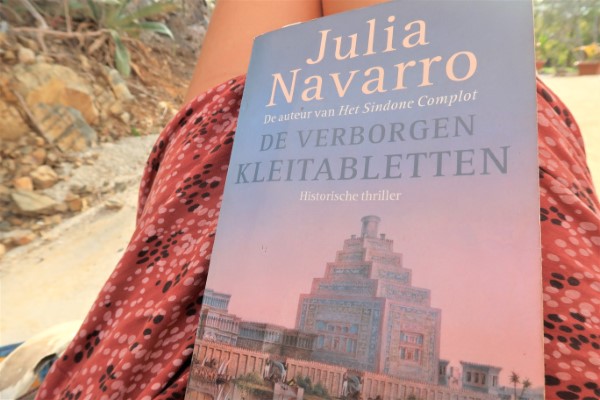 This was Tuesday afternoon. Reading a bit in my book. Trying not to pick up my phone to read the news. 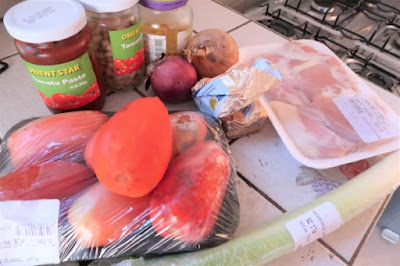 Time to start diner! I took a picture of my ingredients (boneless chicken thigh, a leek, red onion, yellow onion, half a jar of corn, half a can of white beans, half a jar of tomato sauce and a packet of tomatoes that were going bad). I forgot to take a picture of the end result. It was really good though!
(I made a tomato sauce loaded with veggies and stewed the thighs in it). 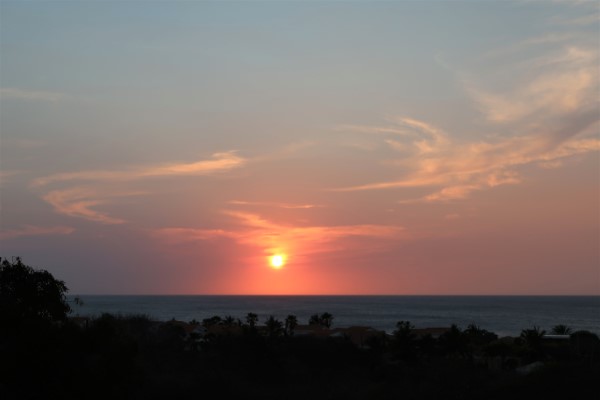 Sunset! Each day is different. 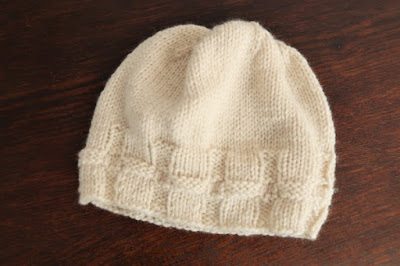 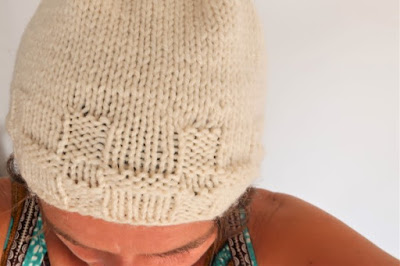 I finished my hat that night. Took pictures the next day, but I'll post them here. I know I said it would get its own blog post, but really, it's just a very simple hat, there's not much I can say about it anyway. The ribbing is 8 rows  K5 P3, then 3 rows P5 K3 and then 8 rows K5 P3 again.

We were both wide awake at 5 o'clock on Wednesday morning. That's an hour early, but we decided it was no use to stay in bed, so we got up. 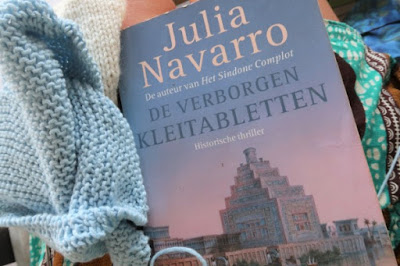 Did some knitting until it was light and then I read a bit. I was able to stay away from the news until 6.30. Since I have been making a habit of checking the news immediately after getting up, this is a bit of an improvement.

We had breakfast, I cleaned up and then I went out for grocery shopping. Just one person per household allowed, so I went alone. 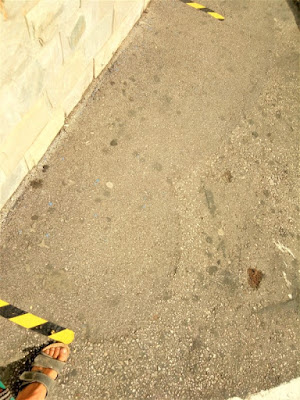 This was outside, waiting to get into the supermarket. Two meters distance between the lines. It didn't take long though, I only had to wait for five minutes or so. Inside keeping my distance was a lot harder. Not everyone was into it. I messed up too, didn't notice the arrows indicating that the paths were now one-way only. I usually skip the second path, since it's all sugar drinks and things like that, so my normal route was completely opposite of what was allowed. I have to get used to that. I do think it's a good idea to do this though. Less people bumping into each other. 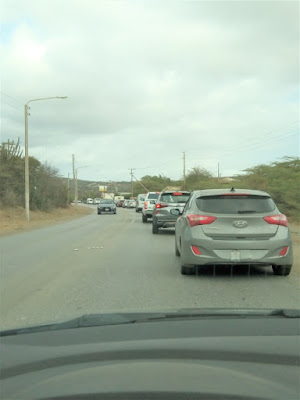 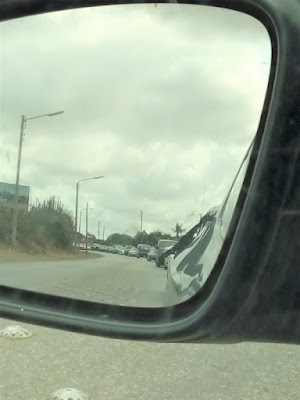 On my way back I got stuck in traffic.
Huh? Yes, we're in lockdown. But there were actually a lot of people on the road and the police was trying to check why. I had a lot of trouble understanding the guy through his facemask (and because of my ear infection).
"Where are you going, ma'am?"
"Home."
"Where's that?"
"Westpunt."
"Okay, have a nice day."
I had papers to prove I really live there, but he didn't even want to see them. I guess this was meant to intimidate and demotivate. (This was before they issued the license plate rule.)

I needed some medicines, so I got into another line at the botika. It took a while before I could get in, but they had everything I needed (T. takes aspirin as a blood thinner for his heart problems and I needed some painkillers), so all was well.

When I got home, I quickly unloaded the stuff that needed to go into the freezer and the fridge and then I listened to the press conference. That's when we heard we are now only allowed to be on the street (and only for essentials) two days a week.

We had lunch and the rest of the day escaped me. I was tired. Tired of shopping, tired of the impact everything has right now, tired of everything. T. felt the same. I read a few chapters in my book and browsed a bit on the internet. At five o'clock we had our daily snack: cucumber (with a bit of salt and vinegar). I always look forward to that! 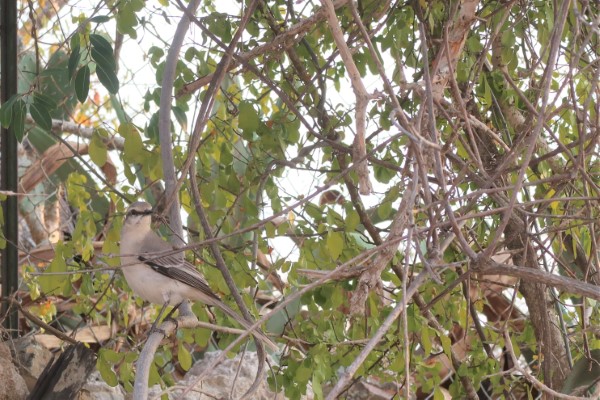 I took another picture of a sparrow. 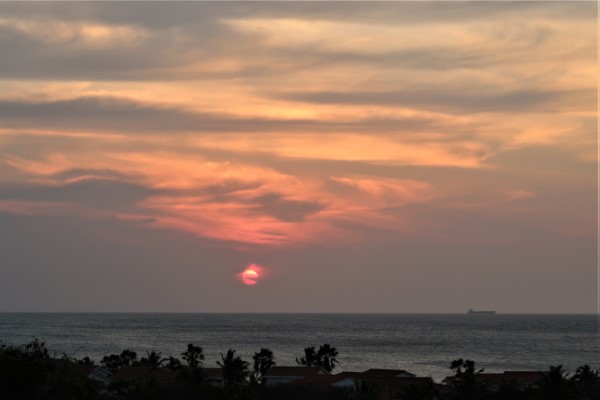 And of the sunset of course. 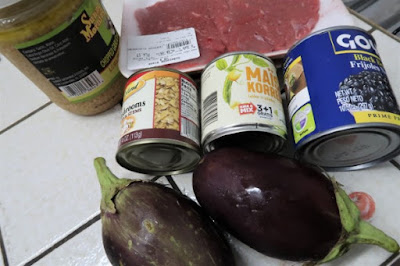 Time to cook diner! These were my ingredients: two eggplants, a can of corn and a can of black beans (I didn't use the mushrooms), a lot of garlic and some steak. 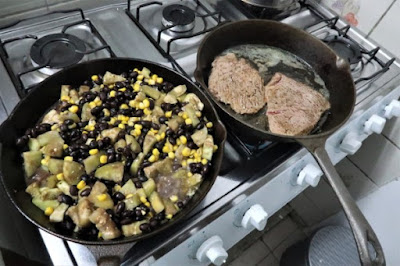 The end result doesn't look great, but it tasted so good! 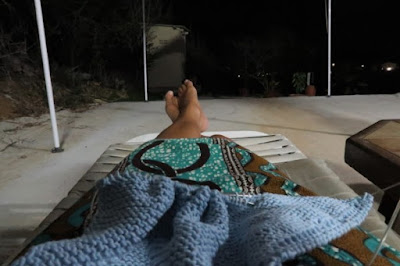 After cleaning up the kitchen I did a bit of knitting. That's my favorite time of the day. Just sitting, knitting and thinking, and talking with T. Too dark to read, trying not to pick up my phone (was mildly successful at that today).  It's the best way to end the day.
at April 02, 2020