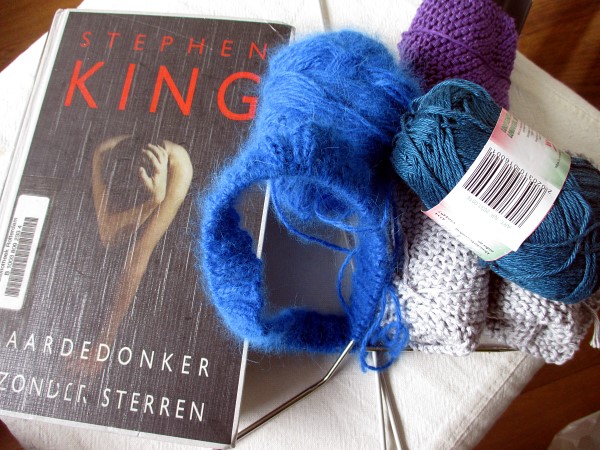 Knitting: After finishing the sweater dress, I've been working on some smaller projects. Although one of them is actually a big project. I'm trying to knit enough potholders to give to my family this Sinterklaas, but I did the math and well... 7 households times 2 potholders times 2 squares makes 28 squares to knit? Oh my, so boring...
So I'm allowing myself to work on something else too. I found this assortment of really soft wool at the thriftshop one day (you can see the whole bag here) and I've been dying to start working with it, although I'm not sure what I'm making. Maybe a hat, but it could also be the start of a sweater. I'm trying to figure out how far one of these little skeins will get me before I decide. Ha, that would make a bigger project too, I guess. I did knit some smaller items between the sweater and these though. I will show those soon.

Reading: Stephen King: Full Dark, no Stars. What can I say? I think Stephen King is one of the greatest writers of our time, but I'm not really into scary stories, so I don't often read his books. Sounds silly, I know.
When I do read his books I'm always impressed though. As a reader, but also as a writer. When I read his books, I feel I've got so much to learn.
I really appreciate his little forewords and epilogues for that matter, since he usually talks a little about writing in those. I think I read somewhere that he wrote a whole book about writing, maybe I should buy that someday...

Anyway, these four stories are really raw and harsh, but somehow I couldn't stop reading when I started.
I read the first two in one evening and I think I will start reading the third one tonight.

So what are you knitting and reading?