We started by walking down from E's college, into town (we took a taxi to get up again, that's a rather steep hill to climb after a day of strolling through town). 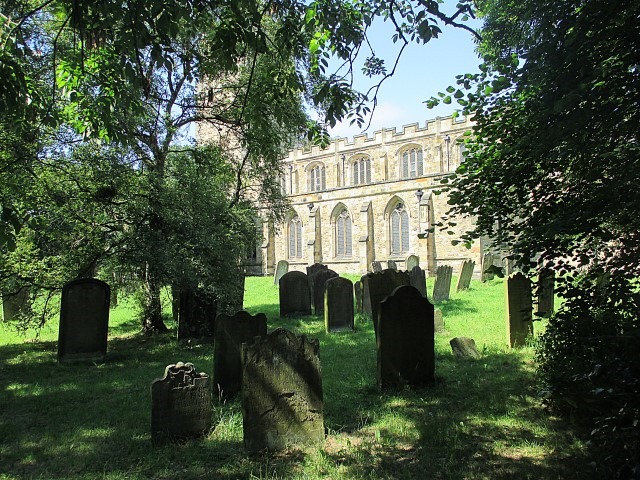 We past the cemetery again. Even in the harsh light of noon it had that spooky glow. 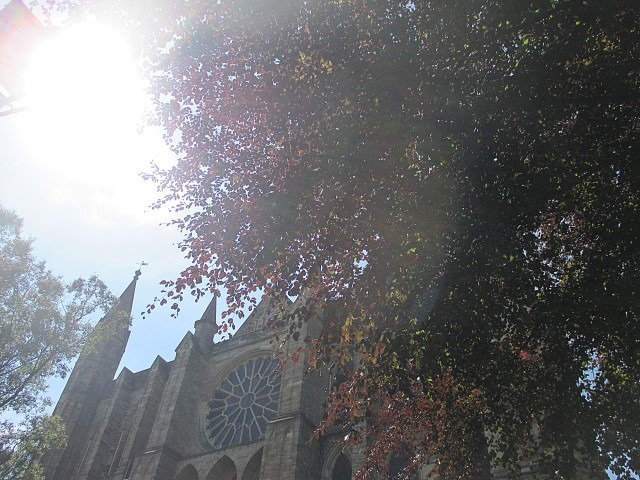 Another one of those black trees, in front of the cathedral. 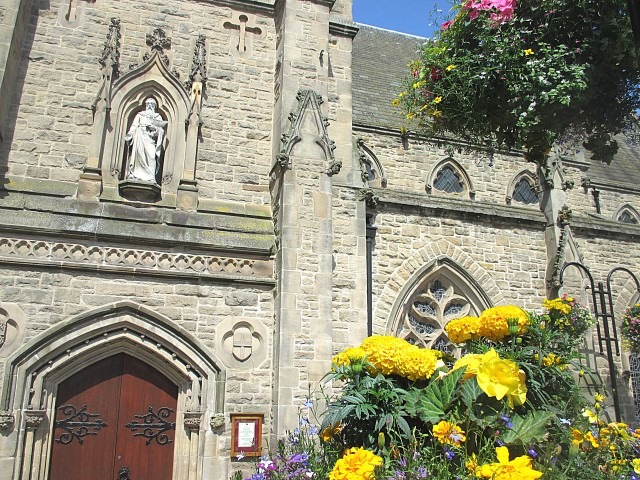 The market place was filled with flowers. 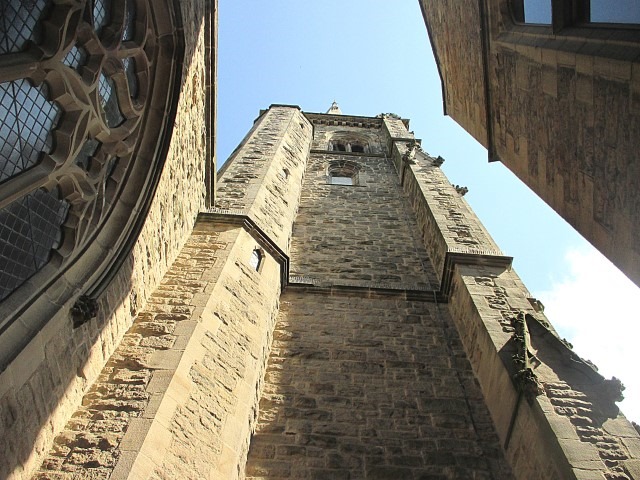 I'm not sure what this building is, but it was at the market square... 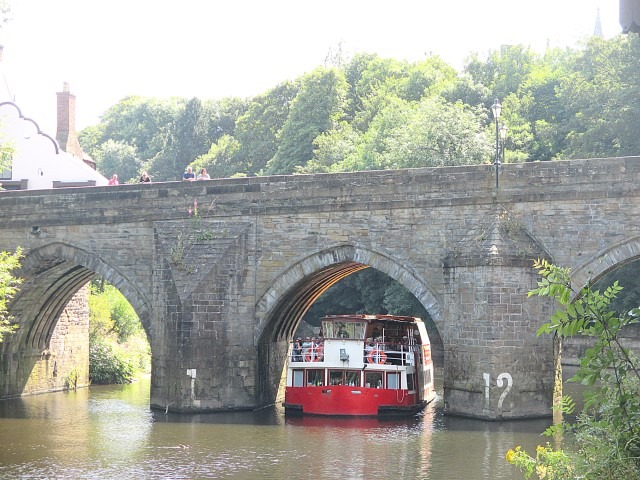 We took a boot tour over the Wear. 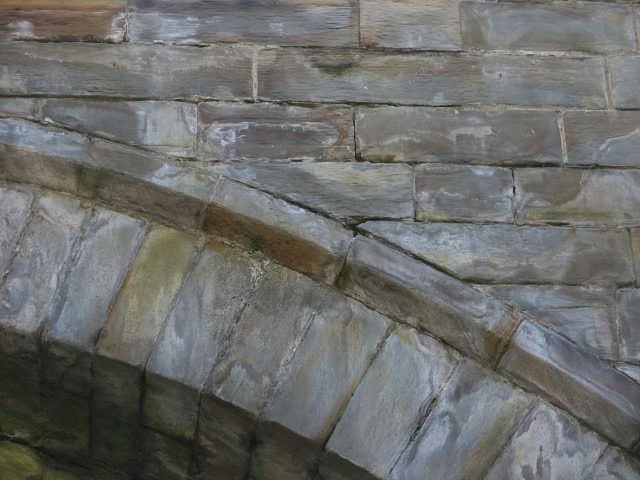 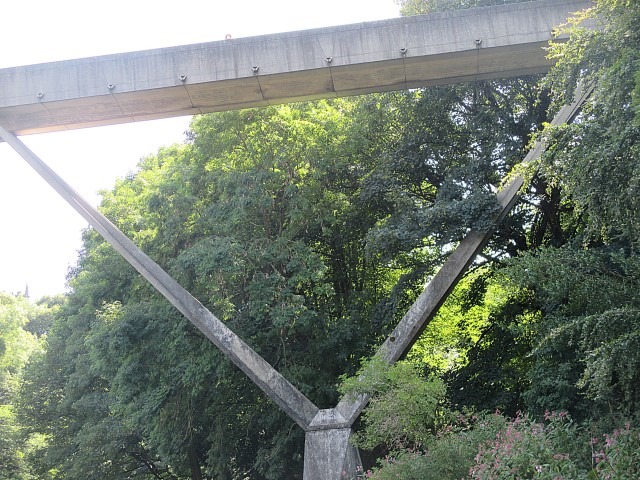 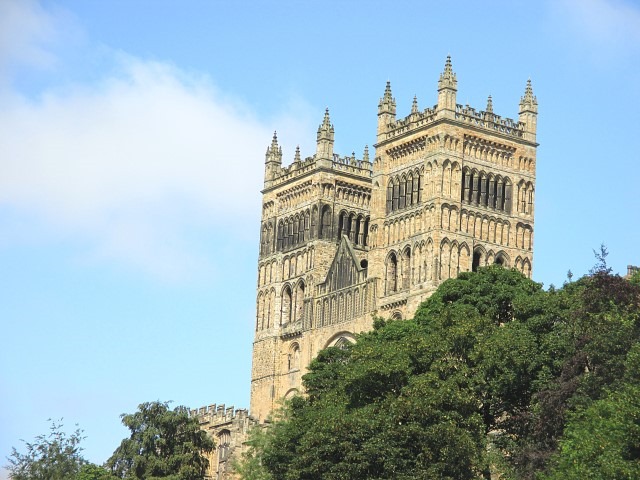 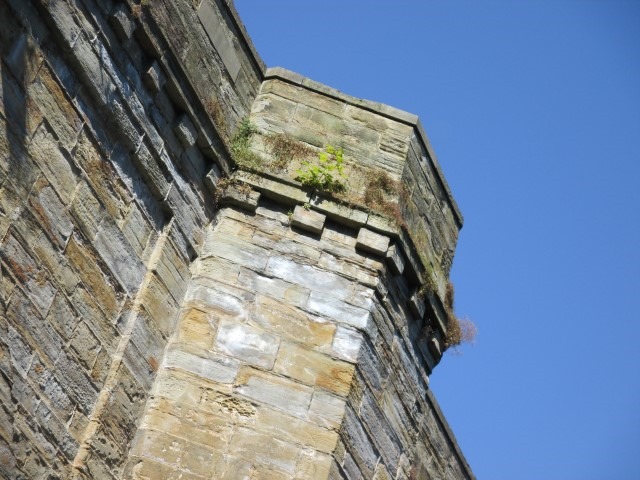 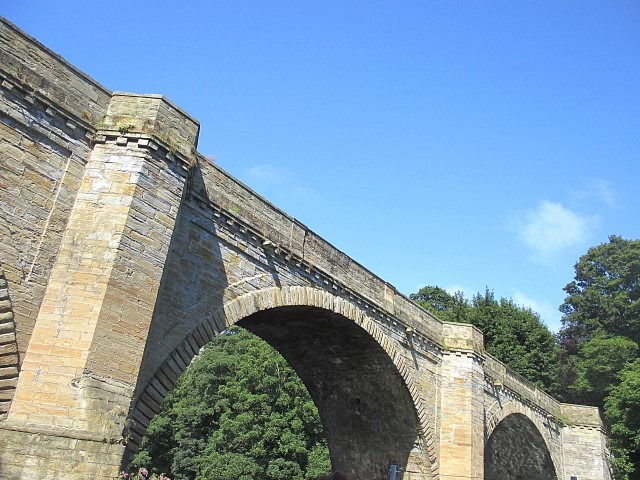 and the bridge again. Those houses at the right are remains of the first bridge that had houses built on top of the whole thing.

In the meantime we heard some nice stories about the ancient and more recent history of Durham. It was fun, although E. was only half amused by the not so friendly remarks about the students in town. Luckily at the end of the tour the man acknowledged that the town wouldn't be as booming as it is now without them.

The rest of the afternoon and the beginning of the evening we spent chatting and drinking (virgin cocktails - yum!) and eating at a chicken restaurant where Theo and E. played Russion Roulette with chicken wings (you didn't know which spices were on them and some were very, very hot).

It was time to use up our saved patience for (the insides of) churches and castles.
First we visited the cathedral. 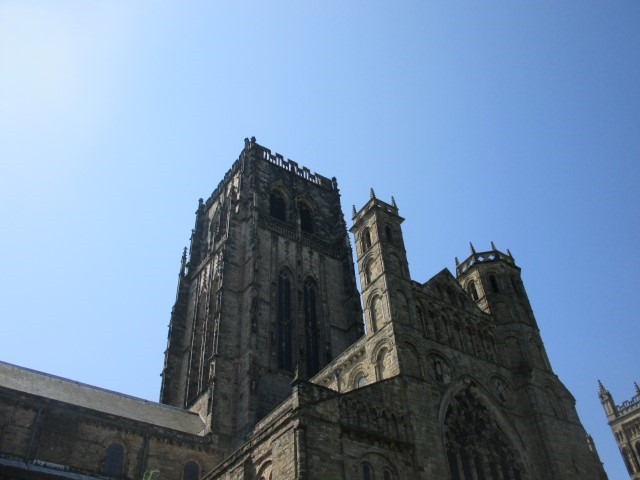 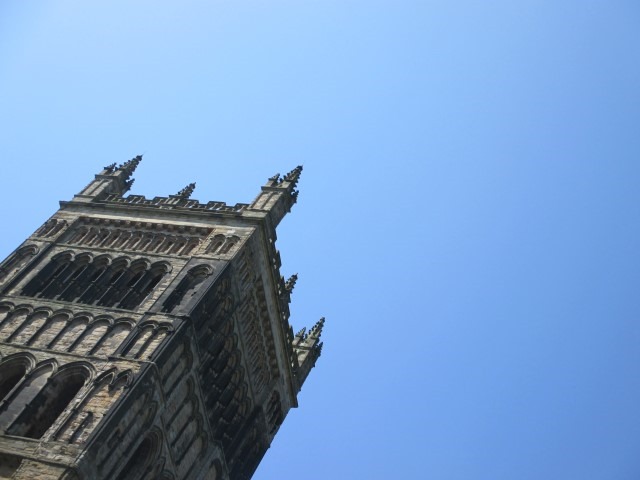 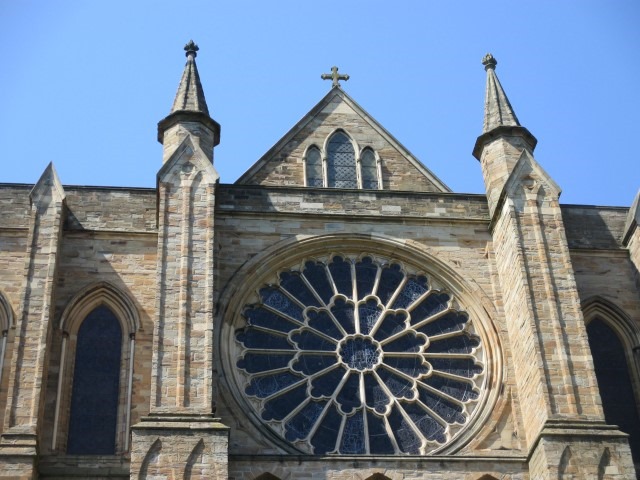 An impressive and beautiful building, where we were welcomed by a friendly clergyman, had to buy an information flyer for 1 pound and were not allowed to take pictures inside. But it was worth visiting.

Then we wanted to see the castle, but had to wait at the gate till the tour started (since it houses hotel guests in summer and students in the rest of the year, nobody is allowed in there without a guide). Sadly pictures were also not allowed inside the castle, but luckily there was a lot to see outside too. 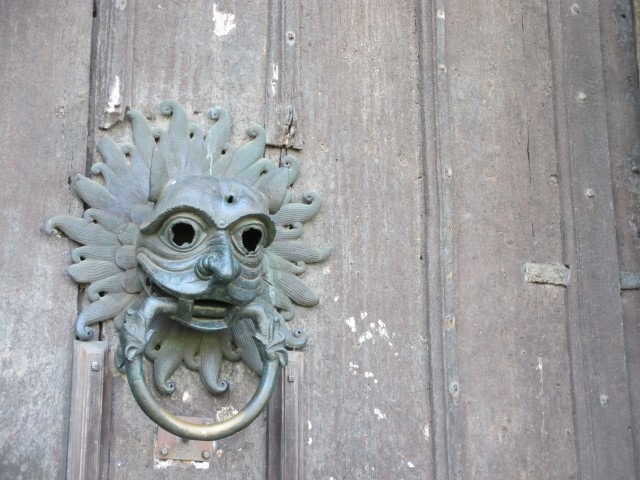 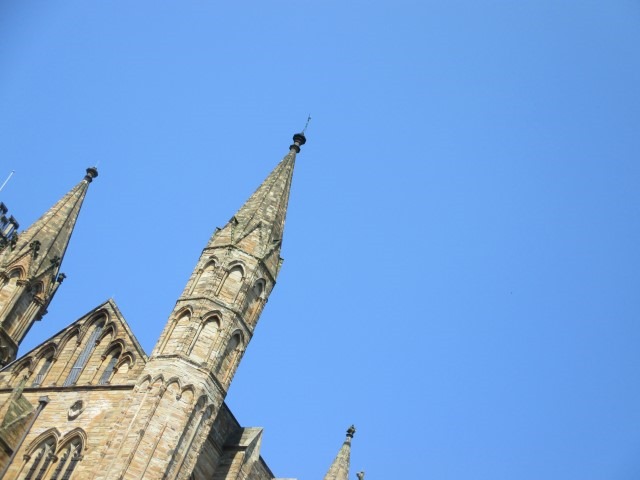 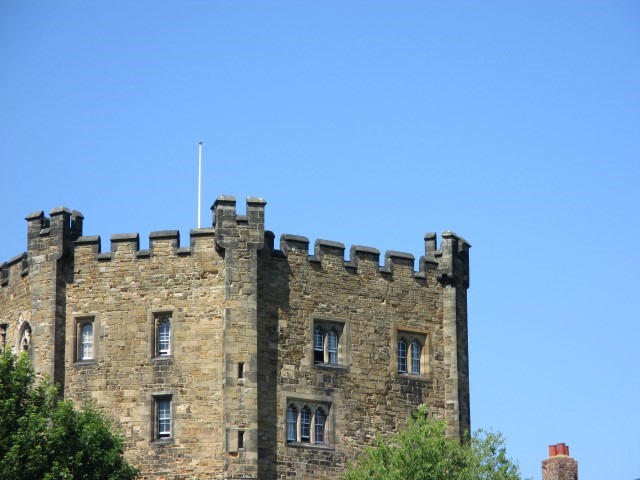 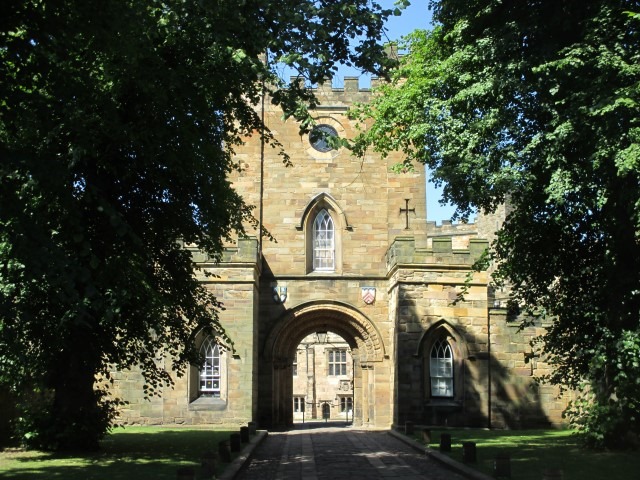 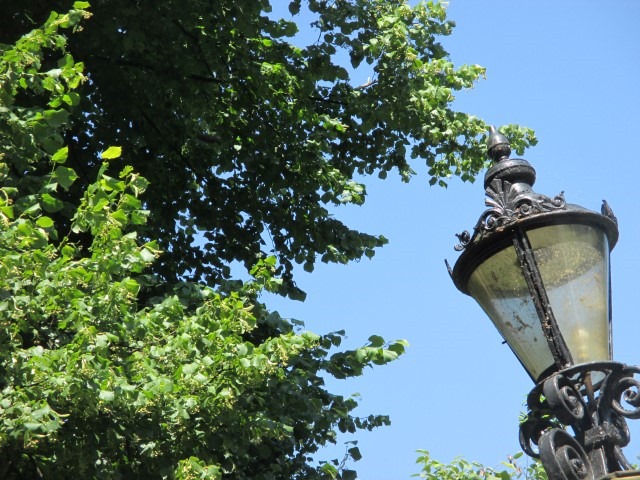 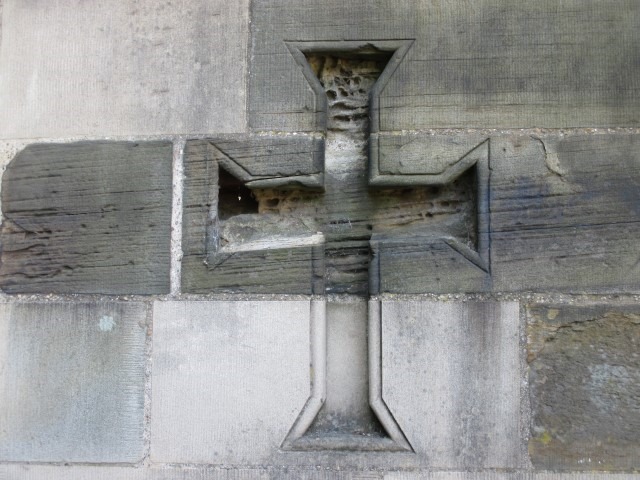 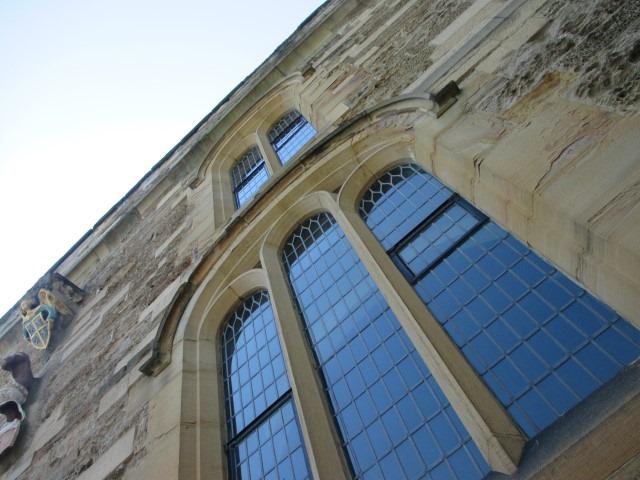 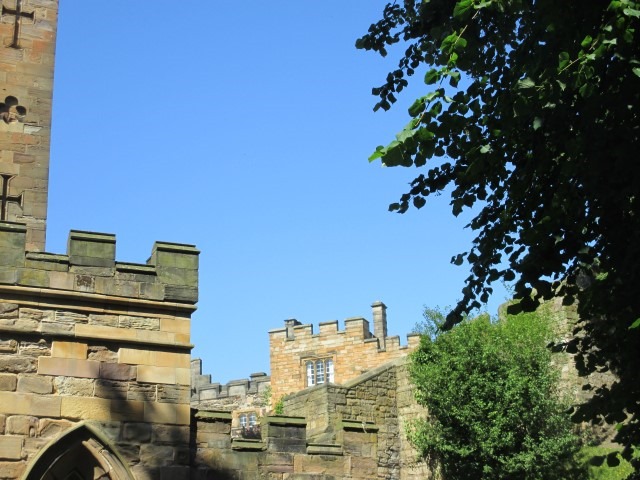 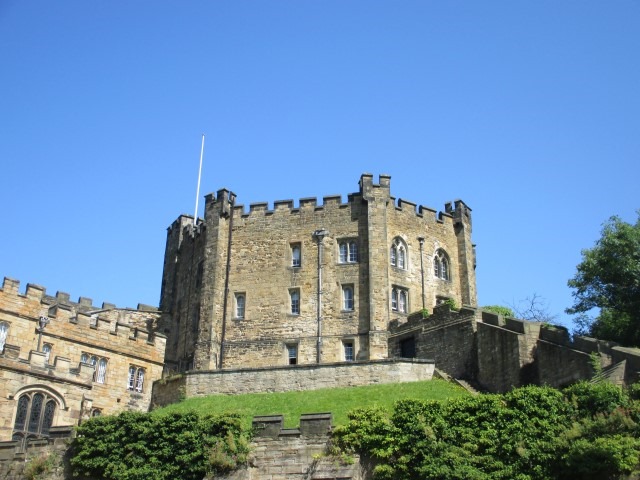 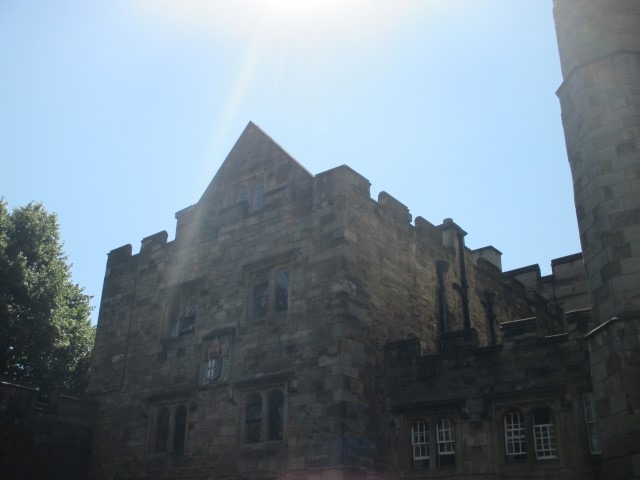 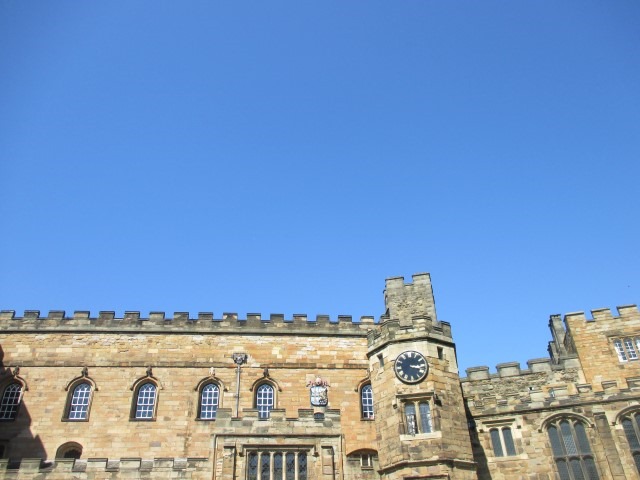 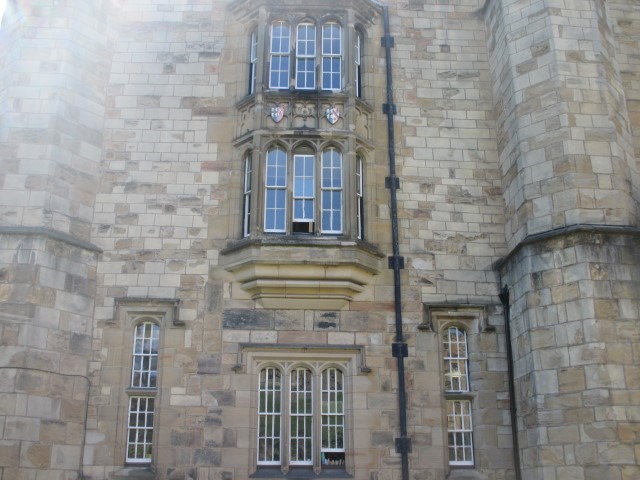 Behind those windows is the library. I immediately spotted the book they used to keep that bottom window open. 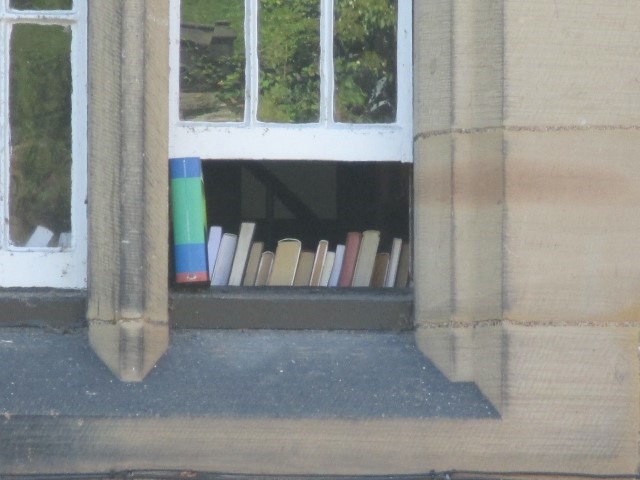 Yep, Harry Potter. The whole castle feels a bit Hogwarts like, but nothing of the movies is filmed here (there was some filming in the cathedral, in the courtyard and on one of the towers). I heard the director did propose filming in the castle but the castle refused. That's probably because of the students living here. E. had considered this place too, but had some good reasons to choose her (modern, but also very nice) college (for instance the self-catering she could do there, which is handy if you have foodallergies).

One of the students was our guides. She was very proud of her college and that showed.

A college in Durham is not the school, by the way (I think it is in the US), it's the house the students live in and their social community, that hosts formal diners (for which they have to wear black gowns) and parties, but where they also can turn to if they need assistence.

This tour reminded us of the fact that we hadn't properly toured E.'s college yet, besides her room and the kitchen (that she shares with 5 other students), so we did that when we returned. She bought us a drink in her college bar and then the day was over already.

Luckily we still didn't have to say goodbye. E. was going to join us for breakfast the next morning. Nothing fancy, just a cheap breakfast in a shop restaurant, but we had had breakfast there twice already and at 3,35 pounds it was a nice deal for a six item breakfast, we thought. It did last us through our days of walking through town...