Painting those office walls had a few side effects, as I knew it would. Removing that table and putting it upstairs was just a little sidestep from all the other things I had to do. So I made myself a little sewing nook.

Those of you who have been reading here for a long time may wonder what happened to my sewing room. Well, we broke out the wall between that room and our bedroom and that was the end of it.

Early this year I also got rid of the sewing table I had in our (now bigger) bedroom. I figured since we had a real office now (meaning my husband would mostly work there) I could go back to sewing in the living room. Well, it turned out I couldn’t. Pulling the sewing machine out of the cupboard was just too much of a hassle (it didn’t help that I had to force all my supplies and fabric in, so taking out the sewing machine meant having to remove a lot of other stuff). 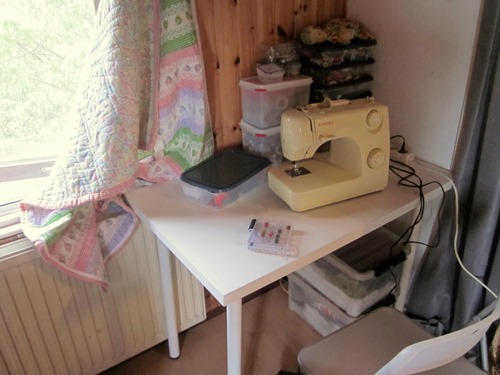 So I’m back in the bedroom. It’s not a studio, or even a sewing room and all my stuff is in plastic boxes. That worked great when it was in the closet, but now it’s just a stack of boxes. I think I will be changing things around here, but for now, I’m happy. I missed having a little corner of my own to make stuff (hmn... I think I really need a new bag).

I was happy enough to finally tackle my growing pile of things to mend. I have a habit of forgetting about those things. When the girls were little I often never got to repairing cloths, since they already grew out of it when I finally sat down and sorted through that pile. This time there were also some things that had been waiting for me to do something about it for over a year.

So I added some straps to a sagging strapless dress, repaired a few torn seams in a dress and pj’s, closed a tear in some trousers, fixed a body, repaired a hole in a sock and hemmed some jeans.
That last part was so much easier than I thought. I found a link on pinterest that showed you can simply use the original hem, by sewing close to it and folding it back. Like so: 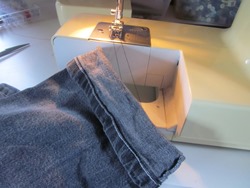 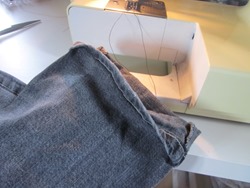 It worked like a charm! Wished I had known that years ago.

So now my to-mend-pile is a pile of mended things ready to put away. 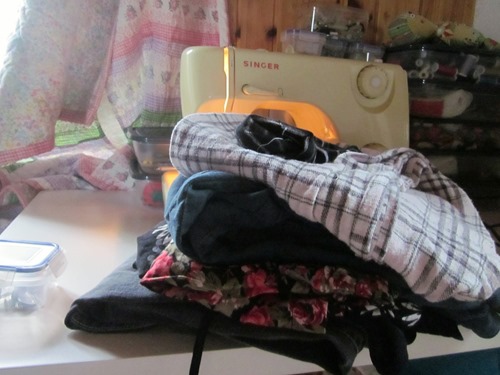 Of course I now think I could keep up with those little mending jobs. It feels so good to have that out of the way. Ha! Who am I kidding? I know myself… Maybe I should forbid myself to do any other sewing when there is something to mend…