A little bit about my new book 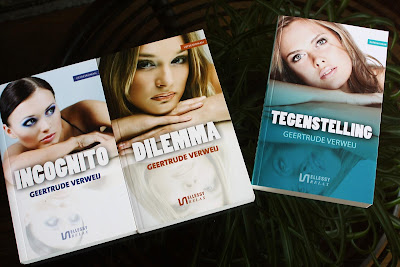 So here I’m staring at my screen, feeling sick (I have the flu, and really got it this time, as opposed to my usual ‘not feeling well for a few weeks’) and trying to find the words to tell people about my new book. I did manage the dutch part of this post, but now for the rest of you...

I have said it before, these posts make this bilingual blogging thing kind of hard. Because, how interesting is it to have to go through a whole post about a book you will not be able to read? A post that ends with giving away one of said books, so my non-dutch readers will have nothing to participate in? I know... Well, I can promise that there will be another giveaway soon(ish). One that doesn’t involve language. So stay tuned for that. (oh my, this was actually just a brainwave, and now suddenly it’s a promise? Oh well...)

I already told you that this book is the last part of a trilogy. Each book tells the story of a different person and they are perfectly readable on their own, but they also connect in a nice way. The first book is about Sofie, a famous model that decides to go undercover after she had some bad encounters with the tabloids. When writing that first book I already knew I wanted to give her younger sister, her own book. So the next one is about Renske, who - four years later - has to make a lot of hard decisions on relations, her career and caring for her little girl. I always toyed with the idea of making it into a trilogy, but when I found out that almost all my readers didn’t understand one of the male characters in that second book, I decided to give him a chance to redeem himself. But since I use a single point of view and my books are written for women, I had to introduce a female character too. So I made up an au pair that would work for Sofie and Renske and get to know Diederik there (because he’s the birthfather of Renske’s daughter). Bonus for me: I got another peek into the lives of Sofie and Renske while writing this story (Sofie just had twin boys and yes, I sometimes feel like my characters are real).

It is kind of hard for me to tell people about the background of this sixth book of mine. Readers so often assume that the stories I tell are based on things that really happened. But they’re not. Inspired by real life, yes. But also completely made up.
So, although this book is partly about the problems of being a genius (the male main character) and being dyslectic (the female main character) and I do know how hard this can be from people that are very close to me, those stories are not mine to tell. The stories of Diederik and Nina are not those stories, just inspired by them.

That said, it was an emotional story for me to write, since so many of the problems those two run into, were things I had (more or less - not exactly) witnessed in my own surroundings, or could imagine happening to people I love. And then I had to make sure that those conflicts were not only things I could relate to, but they needed to be recognizable for other people to. I did a lot of research* and I found out my thoughts about things were quite right. I do hope my book will help a little bit in understanding both geniuses and dyslectici.

*Most of my research was through the internet, but I have decided not to share any url’s since so many of the websites I found sell ‘solutions’ and I don’t have the time to really dig in and determine if those are real or not and if I want to connect my name to any of them.

Anyway, before you think this book is very different from my normal writing; it isn’t. It’s still a nice and simple easy-reading love story, with some family troubles and a tiny bit of suspense added in the mix like all my books.  In Dutch only. So sorry for that. I really, really tried to write in English, but if I keep it real I have to admit I can hardly manage blogposts (I sometimes cringe when I read them back). But who knows... maybe someday my books will be translated...
at May 01, 2013