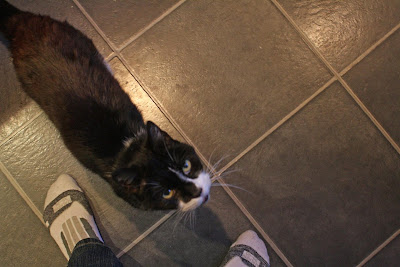 When I said I was going to slow down, I didn't mean to disappear for weeks. I was trying to find the best way to incorporate blogging into my life (because just when I feel like it doesn't work for me) and I even had some drafts ready. But life filled up quickly after that last post.

With normal things like:
:: laundry that seems to multiply everytime I think I'm almost done
:: a tiny and full house that makes it hard to balance between work and rest
:: cooking litres of soup and realizing that I still don't really like soup. But I do like how it fills that time between "getting-hungry"and "everybody-is-home-for-diner"
:: a cat that was demanding (using his very loud voice) to be let out and in again about every half hour (or more often), that we gave his own door because we were fed up with his screaming and that is now screaming that he doesn't like that door every half hour before he finally uses it
:: a daughter who forgot to set her alarm on her last day of internship, who I drove to the busstation, where we saw the bus riding away when we arrived there, followed by a chase of said bus to get her at work only 20 minutes late instead of 50

Also, life threw me some serious curveballs and right now my days are mostly filled with fear, insecurity, relief (because it isn't the worst case scenario) and daily drives to the hospital to visit my husband.

I really, really hope to resume a somewhat regular blogging schedule soon. Because that would mean he's better and home.
at January 31, 2013