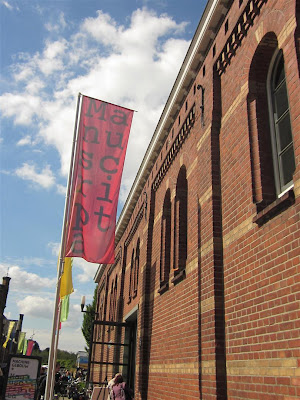 This weekend we had Manuscripta in Amsterdam, a big event marking the start of the book season. I was going as a visitor, but the first thing I did was visiting my publisher’s booth. After I finally arrived, that is, because the road I needed to follow was closed and my navigation system insisted that I was going further and further away from my destination when in fact I was very close right before I decided to turn around. Ahem. And then, after I asked for directions, it pretended it had known all along where we needed to go. I really don’t like that thing.
Well, anyway, Larry and I talked a bit about my upcoming books (one in November, and two in 2013 again) and I met the owner of the publisher that is cooperating with him to publish books in bigger print for people with poor eyesight. I knew he was going to do two of my books, but now he told me he wanted to do all my books. Yes!
Next to my publisher’s booth Wilma Hollander was signing her new book. We’ve been connecting through the internet for years now and last Wednesday we met for the very first time at a mutual friend’s house. It was fun to see her again though and I wish we could meet once more before she returns to her home in Greece, but the fun meetings she planned are either on the wrong date or too far away for me.
Anyway, we talked a lot, I met a few other writers and we talked some more. After an hour or so I decided to go and visit some of the other buildings and booths. I did a workshop writing ‘ikjes’ (very short anecdotes that are published in a well-known newspaper here), listened to a presentation about strong brands for writers and publishers (though I wished he had shared more tips and less numbers), saw Arne and Carlos, the designers of the knit Christmas balls, and visited the kitchen where someone talked about eating from your own garden (which is not very common in the Netherlands yet).
I had a fun little talk with a man that was promoting some book about concurring dilemmas. He asked me if I had a dilemma. I told him no (I actually think I’ve got it now), but he insisted I must have one. So I acted smart and showed him the book I wrote called Dilemma and we talked about that for a while.
A small step for mankind, but a giant leap for me, since I have so much trouble actually telling people I am a writer. Bringing my books (and business cards and even a little folder showing my books) was a first for me, but I reminded myself that no-one had to know if that was silly. It wasn’t. I even left my new book and a folder with a newspaper that may do a review on it.
Then I returned to Wilma to say goodbye and ended up chatting for another hour. I returned home exhausted, but with renewed energy to actually start this book season myself too.