Working on the book 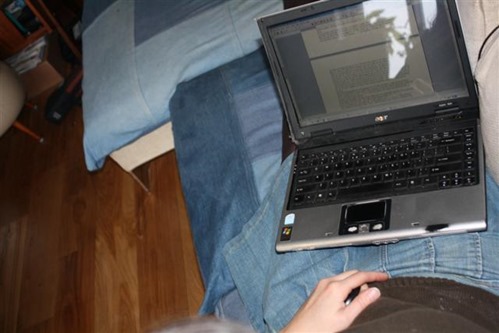 I joined the Flickr group “a year of mornings”, although I don’t think I’ll make it through a whole year (oh my, I suddenly remember the year of color thing – I totally forgot about that). I told the owner I couldn’t commit to that and was kindly invited to join anyway. So the last two days I have been picking up my camera much earlier than usual, resulting in different pictures than usual. This morning however, I was too busy to even stop and think about it that early (it was still morning though). I had to be at Miriam’s school at nine to pick up this year’s first report card (it’s a good list -sevens, eights and even a nine out of ten- she is doing great) and I didn’t sleep very well.
On the picture you see the reason for that. Last night I got an email that my book had been worked through by an editor. Would I look through the corrections, change some things and send it back?
I was under the impression that it was in the process of being printed by now (it’s supposed to be in the shops in December), so that was a bit of a surprise… I have asked the publisher what to expect months ago, but was told there was nothing more I had to do.
I’m starting to have mixed feelings about this whole process. I realize I’m new at this and that I’m a control freak. But I get little or no information about what’s going on and that is starting to bother me.
Oh well, I’m still quite excited that I will have a real book in my hands soon (might be later than December though).
And now I’m going back to it. Eighty pages to go…
at November 26, 2008