I was tagged by Elizabeth to tell seven random things about myself. I really had a hard time choosing from all the things that came to mind, but here it goes.

Oh, the picture? That’s my fabric, that I need to sort after dumping it “temporarily” in the laundry basket a few days ago. It’s quite a random picture, thus it should be perfect for the post (and also I’m too busy/lazy/tired to find or make better pictures with the seven things). 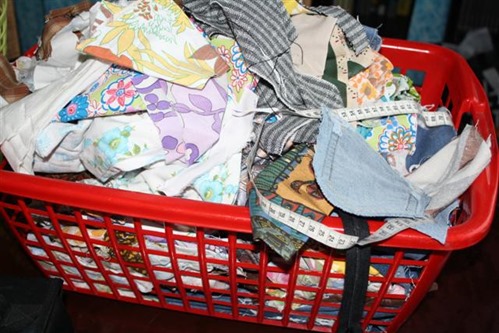 - I feel old lately, but I’m not that old yet (only 37). It’s just that my children are growing up so fast. My “baby girl” is turning sixteen soon and if the twins act as fast as I did, I will be a grandmother in just two years! Still, I never regretted being a momma very young and I think I would like being a granny too.

- I always cry when I hear this song. I make it until about half way and than I break into tears. Played it three times after finding the link and cried three times.

And I think that’s all I’m ever going to say about it here, because I don’t like discussing religion…

- We were in Australia for the millennium, right at the Harbour Bridge at midnight. And afterwards we drove into the desert, just driving for days and days, until we reached Uluru (Ayer’s Rock). I can’t explain how special it was, but I really want to go there again. Other places I want to visit again are Rome and Mount Etna (visited both twice). Places I want to see “someday” are on a long list, but the Grand Canyon is on top of it.

- In our marriage of 18 years, we have lived in one apartment and four houses. I love the house we live in now the best, but I won’t say we’ll never move. The city of Rotterdam is closing us in and we would like a bit more sunny weather.

- I love all kinds of fruit, but I don’t like the taste of banana’s. When I buy smoothies I always check to see if there is no banana in them, which is limiting my choice a lot.

- I sometimes wish I was born half a century earlier, even though that would mean I would have been in my early twenties in the war.

- When I was a little girl the schoolphysician told me I would never be tall. She thought I would have to be thankful if I grew to be as tall as my mother, who is 5′4″. But I grew up to be 5′9″.

Want to play along? Tell me in the comments and I’ll tag you!
Labels: sewing