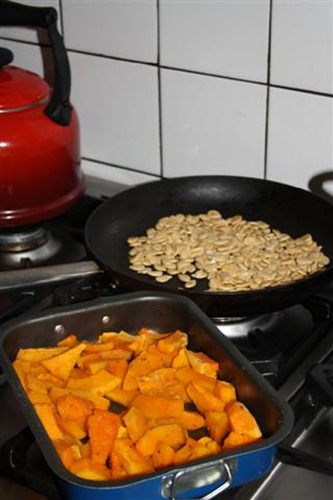 I tried some of the things in the comments of last post. I cooked half the pumpkin in a roastpan, with a bit of water. That worked great, it was soft in no time! I mashed the flesh with some butter and cinnamon. The other half I chopped, sprinkled it with olive oil, salt and pepper and than put it in the oven at 175 degr (Celsius) and for about 30 minutes.
Great recipes! But… we discovered we don’t really like the taste of pumpkin. Ahem… Yeah, I feel kind of stupid to confess that. But than again, how many not-dutch-people like the taste of liquorice (we love it, the salter the better!)? We didn’t really hate the pumpkin, but we just didn’t think it was something we wanted to try again. For us the taste was something in between the tastes of potatoes and carrot (the big ones we use for “hutspot”). Not sweet, not neutral. I don’t know. It must have something to do with regional taste. Anyway, it was nice to try it and I finally managed to cook it right.
Thanks for the help!
Oh, almost forgot! I roasted the seeds. The kids love them. They want me to buy pumpkins just for the seeds now…
Labels: kitchen