What I love: my grandmother’s cupboard 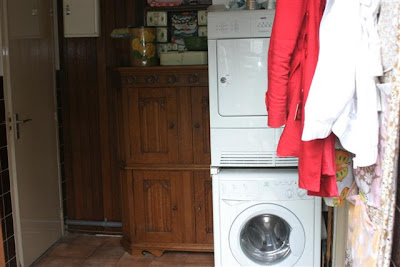 Yeah, I know it’s hiding behind the washer and the dryer, but I still love it. When my grandmother died we were asked if there was anything we remembered from her that we wanted to have. While other familymembers were picking jewelry or antiques, all I could think of was this cupboard. I didn’t even know at the time that my granny designed the woodwork herself.
So the cupboard made it’s way into our home. It has been in the kitchen for a year, but when we put a real kitchen in it didn’t fit anymore. It was either put it in and have very little workspace, or moving it to the livingroom. We did the latter. The livingroom was kind of full, but it looked great. I quickly claimed it to hold my yarn and fabric stash. And because of that I loved it even more. (You may have seen parts of it showing up in various pictures already).
But things are changing again. we want to put a woodburner in the livingroom and the only logical spot for that is where the cupboard was. But where to put my beloved piece of furniture? It’s too big for the bedroom, and we can’t get rid of the other cupboard in the livingroom (those are big, handy and loved too). It didn’t really fit into the hallway either, it would cover up the door to the meter cupboard (is that good english? I used an online translator, but it seems too simple).
I have been thinking about it all night and even dreamt about it and finally came to a solution. It is in the hallway now. I took out the door of the meter cupboard and now we can still reach the plugs (again: I’m not sure - is that the right word for those things that pop out when someting goes wrong with the electricity?) and see the meters. I will make a curtain to cover the opening.
It’s not holding my stash anymore, because I like to see my stuff when I’m making something and I’m not going to be banned into the hallway (ha! as if I could fit a table in there, I would have if I could).  I put some dishes and plates I hardly ever use in there , a pile of winterthings (scarves and gloves) and some other seasonal things like special tablecloths, candles and eastereggs. I don’t want the old hinges to sustain  frequent opening and closing of the doors, so these are the perfect things to put in there (the winterthings will be taken out in winter).
I have been moving around things the whole day now. Because on this spot was an ugly, but very sturdy cupboard that had to be moved into the storage room (ha! we call it that now, it’s very little, but has a door that goes outside and is big enough to hold some cupboards and a pile of wood (we’ll need that for the woodburner this winter). The ugly cupboard was my pantry, so I had to move a lot of food to the kitchen (that’s why those plates and dishes were moved too). I filled one of the cupboards in the storageroom with office stuff from the other cupboard in the livingroom. Am I still making sense? I’m getting lost in all the cupboard talk. Anyway, this made some room for my stash. I say some, because I really don’t know where all that yarn came from. I just does not fit. I will have to do some more moving around.
And than I will have to rearrange some things in the kitchen, since I kind of threw everything in.
But my grandmother’s cupboard looks great in the hallway, doesn’t it?

(I hesitated between this picture and one that did not show the door to the shower or the washer and dryer, but this one is more real. So there you have it. My cluttered hallway with the closet I love so much I’m writing a lengthy post about it.)
at June 19, 2008