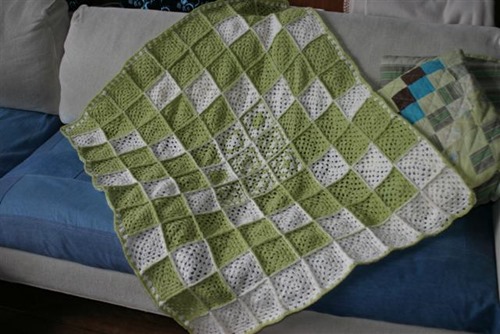 This was the third of the three big projects I started last year (the others: here and here). It didn’t turn out not as big as I intended, though (again: the logcabin is also a bit smaller than I would have liked). It thought it would be great to use as a bedspread for our own bed, but it’s not even half that size. And I’m almost completely out off yarn. It could be a cribsize or a lapsize. I’ll go for the latter, because there are no babies in my immediate future.
I know I could try to find more of that yarn, but I’m so glad I’ve used it all. I bought it when I first picked up knitting again, thinking I would make a nice sweater for myself. But it was too cheap: it’s not spun evenly so the knitting looked lumpy. When I started crocheting it looked like a good and cheap start to learn making grannysquares. And a good way to use it all up.
Ninetynine squares later, I think I mastered them… I did the joining on the right sight intentionally, thinking it would create a nice texture. It did, I had my doubts when I was about halfway through, but I like it now.
Next on the crocheting list: the ripple blanket. Yes I know, another blanket. But this one will be a good kingsize, I swear!
at May 19, 2008