In our back garden 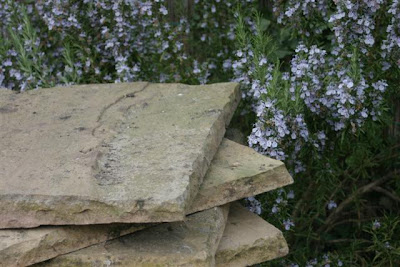 Isn’t this a logical sequel to yesterday’s picture of the front-garden?
Actually it has not much to do with it. Yesterday I was sick and uninspired, today I want to tell you about our back-garden.
When we bought this house there was no back-garden. There was some room to sit on the side of the garage, but the land behind our house was divided between our neighbours. They managed to convince the farmer it used to belong to to sell it to them before we bought the house.
We had no problems with that, but when our neighbours offered to sell us a big part of their garden (the piece right behind our house) we quickly agreed.
We took the garden as it was, with a very big terrace and very few plants. I was impossible to plant more, because there is a big concrete slab under the terrace, which used to be the floor of a barn. The raised bed behind our house was the only place I could try to plant something different.
Well, three summers came and went. The only thing that changed was that the small plants my neighbour planted grew out to big bushes. I love the rosemary, but I had ten enormous shrubs. And the roses were just everywhere, hurting me with their thorns when I tried to get rid of some weeds. Last September I took the biggest and ugliest shrubs out of the bed and I planned to start sowing and planting nice little flowers this spring.
That would be about now. But… instead of doing some nice little gardening I’m taking out the tiles of the terrace and breaking up the raised bed. Sitting and eating outside will have to be done on the roof (which is quite nice too). Why? Well, we bought a swimming pool and to fit it in the flower bed must go.
But I’m not sad to see it go. I mean…a swimming pool!
at April 23, 2008