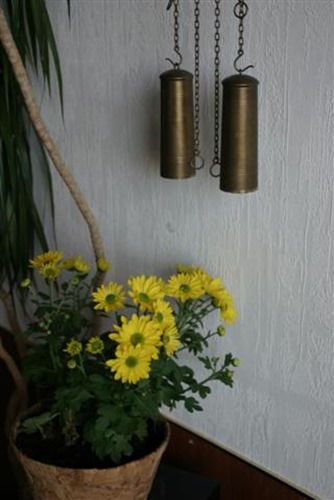 Actually it’s not a corner, it’s the middle of the wall. The weights are from a clock that used to belong to dh’s grandfather.
I bought the flowers last week and they are finally open. I like having flowers in the house, in a vase or on a plant, but I’m not that good with blooming plants. Green plants do very well, I have nourished several back from almost dead. When I brought back a schoolplant I had taken care of during the summervacation, the teacher even thought I had bought a new one. But I just gave it some fresh soil and plenty of water.
Some people say take care of my plants too well, that’s why they don’t get flowers. Flowers are there to make seeds and plants do that when they think they won’t survive. Mine just never fear death.
Well, at least it sounds better than just not being able to sustain any flowering plants…
Labels: at home