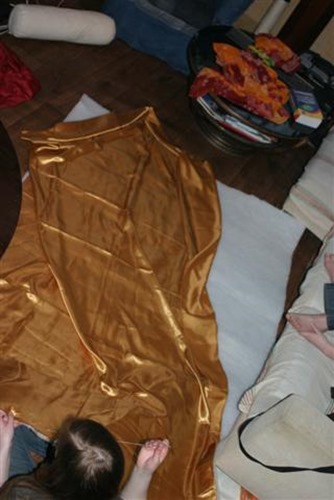 D. basting her own bedspread. I had been making promises to the daughters, but had a hard time keeping them .I can hardly find any time to craft and finding time to sew is even harder, since I can’t use the machine when T. is trying to concentrate on his programming. So when I can sew I work on my own very big projects (almost finished!). Also they wanted some rather difficult things. I kept procrastinating, until yesterday it hit me.

I started them to work on their own. They are almost seventeen so it is about time they learn more sewing skills than just sewing on a button.
D. is basting that beautiful but awful slippery golden fabric onto the batting. When that is done, we have some red nicky velours for the other side. No need to explain that needs a lot of basting too! Well, anyway, she is learning from it. And she likes it.
”It’s so much fun to actually make something yourself!” she stated yesterday. I know, girl, I know!
(Meanwhile E. is cutting her dress, for the fantasyfair. I hope to get some pictures of that later.)
at March 31, 2008